The Great Silence and another half baked game.

I'm seriously trying to come up with some rules-lite sword and sorcery game to introduce my cousin into the hobby this saturday, but something inside me is gravitating constantly towards the mystical wild west themes. I think that's why this quick system is strangely "open". 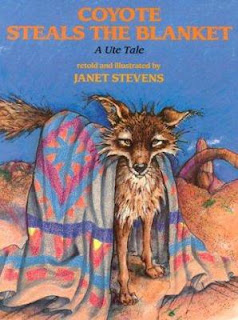 To create your character, roll 2d6 and compare the result with this table. You get +1 on the corresponding traits.

You start at level 1. Pick your starting knack: it can be Combat training, a Skill or a Spell. You can choose to do it randomly.

When you take a level as a fighter, you get +2 HP to your total whenever you roll for it, and a +1 bonus to damage when using a favored kind of weapon. You can pick the same weapon multiple times as you level up for extra bonus.

Whenever you do something that falls under your skill domain, you can re-roll the lowest die and keep the highest result.

The default range for casting spells is anything you can touch or anyone at a conversation distance.

THE THEME; THAT MAGIC FEELING

Whenever you learn your first spell, you must also pick a theme for your magic. This theme represents the inspiration where you get your magic from, and will affect its general feeling and the way it manifests when casting it.
The theme can also hint which kinds of dangers, complications and costs may your magic carry when you roll low.

(I'm taking suggestions for themes, I feel that I could get some better ones) 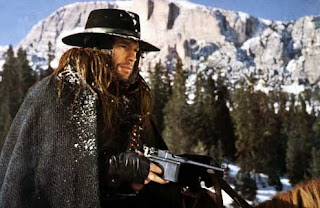 Roll once in each table for equipment:

You get 3 uses of corresponding ammo with all ranged weapons.
They do not represent individual shots, but abstract quantities of them: on bad rolls GM might tell you to mark off 1 ammo. When you get to zero you're out of ammunition.

You also start with 1d6 dollars and some spare change (which is not much). Very cheap things are affordable with just your change (do not keep track of it!)

The frontier is a place of scarcity and you can't always get what you want at shops. If you ask for something outside the norm when visiting a merchant, roll 1d6: on a 5 or 6 they have it for sale; on lower numbers they have a low quality version of the thing, costs more than it should, comes with strings attached or they don't have nothing at all.

RESOLUTION (is the common World of Dungeons/Pbta one, I just like it!)

Whenever you do anything risky, roll 2d6 and add the appropiate trait.
On a 12+ you succeed beyond expectation or gain an extra advantage. In combat, you can also deal double damage or choose a second target.
On a 10+ you succeed without much effort. In combat, deal damage.
On a 7-9, you also suffer a cost or complication.
On a 6 or less the threat comes true; GM will describe how. If you survive, you get 1 XP

Some examples of costs, complications and threats:
-suffer an adequate debility
-GM introduces a new danger
-expose yourself or others to danger
-face a difficult choice
-lose some equipment
-you suffer damage (1d6 for common hazards, 2d6 if the threat was overtly dangerous)
-a pending threat comes true

You start the game with 2d6 Hit Points.

Whenever you rest, you can re-roll your HP: roll 1d6 if you camp in harsh conditions or 2d6 if you find a confortable place, like an inn. If your result is lower than your current HP, discard it.

Should damage take your HP to 0 or below, you can still roll to endure

(When you must endure, roll +STR if it's physical or +EERIE if its mystical harm. On a 10+, you can ignore your wounds, at least for now. On a 7-9, you suffer a debility or other complication. On a miss, you're as fucked as the situation demands)

Whenever you roll a miss, you get 1 XP. Every 10 XP you go up a level.
On even levels you get a +1 on a random trait.
On odd levels you can pick a new knack. 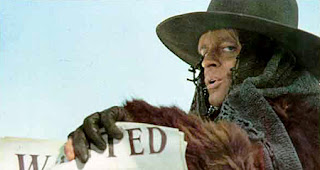 PD: If you like westerns, you should really see The Great Silence. I didn't knew about it until yesterday and it's awesome. True grit, on the other hand, was not bad, but nothing of the other tuesday.
Posted by jack tremaine at 04:49 No comments:

Email ThisBlogThis!Share to TwitterShare to FacebookShare to Pinterest
Labels: the west

As an aspiring tattoo artist, I draw lots of things everyday; starting with the lines, then shadows and colors. So when I received in the mail A Most Thoroughly Pernicious Pamphlet, (by Mateo Diaz, go here to know more about it, his Pernicious Albion setting is awesome) and I saw it's art, I couldn't take the idea of painting it out of my head. 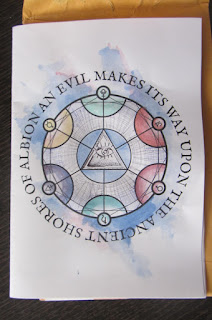 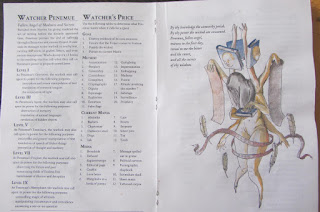 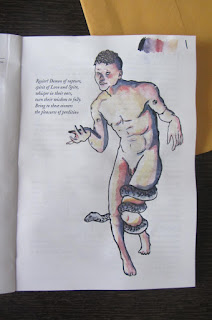 Posted by jack tremaine at 03:29 No comments: 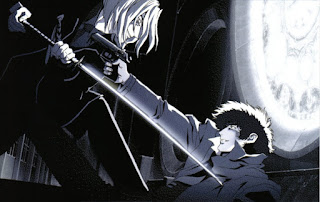 I was thinking again on cowboy bebop and how it's premise could be extrapolated to tabletop campaigns. Here is what I've got by now:

The setting is a weird west kind. No space component. Modern anachronisms such as radios, early electricity or early telephones are allowed. Magic is allowed too in low doses (sympathy, soothsaying, alchemy, mysterious relics, certain rituals).

The wilds are inhabited by elusive fey people, that take the role of magical native americans. The Big cities to the east are corrupted in the high spheres and ruled by gangs at the street levels. In the middle ground, there is a vast space called "the frontier"; where the action takes place.

All players start as bounty hunters. Maybe they're associates, maybe they've just met each other in a tavern.This kind of world supports bounty-hunterism in a semi-legal way as a part of the law system; and there are search and seizure orders set in the local taverns and emitted on a special radio station that all bounty hunters can listen to in the middle of the plains (If they bought a receptor at character creation!)

The cost of life is a constant: equipment gets used and many abilities rely on the characters resting properly at inns to refresh. My gaming group also loves money management in our games, but I don't take advantage of this as I feel that I should: I want to make them to have choices between buying a new horse or spending some whiskey at the tavern, and make that choices have relevance on the outcomes.

All players (and this is where I feel that cowboy bebop has the most influence on this) must roll on this table before the game starts. They may do it secretely between them and the GM, to find their real inner drive behind their badass bounty hunter mask. Eventually, the pursuits they follow will lead to clues to resolve their unfinished pasts (GM, do your homework!). It's up to them to reveal this secrets to the other party members.

Posted by jack tremaine at 04:59 No comments: