Into the Hurricane, my One Page Dungeon 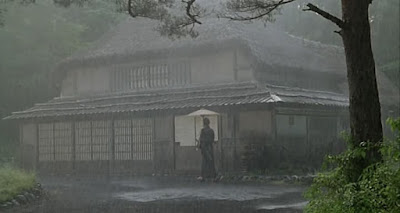 So this years' edition of One Page Dungeon has finally chosen their finalists, and i'm not among them; so I'm going to put my submission here, for anyone interested; just click here:

The premise is simple: A little japanese town is struck by a hurricane; which, as the old people would tell you, is another word for a posse of wild kamis and youkai. The PCs may be travelers or inhabitants, but anyways they're now caught in that town.

Email ThisBlogThis!Share to TwitterShare to FacebookShare to Pinterest
Labels: japan 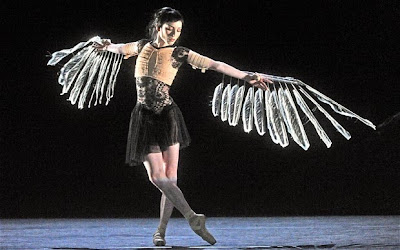 When talking about The Raven, in singular form, we are talking probably about THAT particular raven; the trickster who, tired of stumbling with things in the dark, allegedly stole the sun, the moon and the stars from the hoard of a troll king. Since then, the world was called the Daylands in his honor, and the title has passed along his bloodline.
Like him, all this raven chiefs have the power to shapeshift into a human; male or female depending on the raven's gender, but always dark haired and uncannily handsome and charming. And, as their liege subjects, they're fascinated with shining, glimmering things.

When your character dies and there is no turn of the page, a raven will come to take your soul and guide it to where the birds go in the winter (which is just another name for the land of the dead), on the other side of the world.
But if you roll a d20, and you get your level or lowest, it means that the ravens have told the current Raven Suzerain about your deeds, and he/she was so impressed as to come personally and resurrect you; against the natural order. Maybe s/he loves to hear about your tales, or has fallen in love with you. Maybe s/he just wants to ask you an important mission that only you will be able to handle (killing a wizard who has cheated death, or recover a shining thing at the bottom of a lake).

BTW I just learned today the word Suzerain, and I liked the ring of it!

Posted by jack tremaine at 15:50 No comments:

Email ThisBlogThis!Share to TwitterShare to FacebookShare to Pinterest
Labels: the daylands

A setting about tolls and trolls

So i have a basic core system which i'm very proud of
* roll 3d6 in order: Toughness, Awareness, Wisdom.
* d20 roll under an attribute, damage based on weapon
* no to-hit rolls on melee: both fighters roll damage at once. The difference on the rolls is the damage dealt to the lowest roller. When fighting at range, you must pass an awareness check, and on a hit you do [weapon] damage.
* Damage reduces your Toughness. A single hit of 3 or more damage makes you roll a Toughness save: on a miss, you're incapacitated. Armor works as damage reduction.
*You choose a skill at the start that allows you certain boons (figher -rolling extra damage-, changeling -making small magic-, certain crafts -doctor,tinker,thief,hunter- etc). Each adventure you finish alive, you can pick a new skill, if you explain how you got it. You also roll a d20 for each attribute, and increase in +1 those you've rolled over.

Now i'm making a setting for the campaign; based on an idea i saw on /tg/; and i'm in need of some inspiration:

The world is filled with trolls; both the 15 feet tall ones that tax the bridges and that may be fooled by a charming human; to the brutal, massive trolls up to 80 feet that live on the glaciers and never bothered to talk if they can prey upon the talkers; and anything in between. (Troll Damage depends on their size and on the object they choose to throw at you)
Forest trolls are particularly neutral if they have game in their territories; lake trolls cause shipwrecks in order to get those who fall on the waters.
There is also a cult around goats, and the three billy goats gruff tale: Goats are seen like brave warriors who don't fear monsters, and stand for their kin. Trolls also worship them as a reminder of the deceptiveness of non-trolls.
I have a triad of humanoid pagan gods, all of them represented with a bow and arrows; which may or may not be related to the fair folk.
The trolls in itselves are a menace enough to treat the whole world economy, as the caravans raise the prices of their stock according to the troll tolls they have had to pay (trolls mainly demand food, brides -occasionaly princesses-, good stories and money). They seldom attack towns unless they have studied the raid and believe that there are chances to fulfill their hunt succesfully.

I'm still thinking about a pair of things:

1. I'm having trouble deciding whether i should make the world about goat knights clad in armor and zweihanders, or make it on a slightly advanced world (primitive electricity, flintlocks, seasoned adventures with rapiers, capes and daggers. Which appeals more to you personally?

2. Besides big deadly trolls lurking in the wilderness and nasty wolf-riding, eerie charming faeries, the setting has no other conflict at all. Which other awesome conflicts could i add to this thing? I'm thinking on a war between two major houses or kings.

I answer questions if somebody is interested.
Posted by jack tremaine at 12:39 No comments: