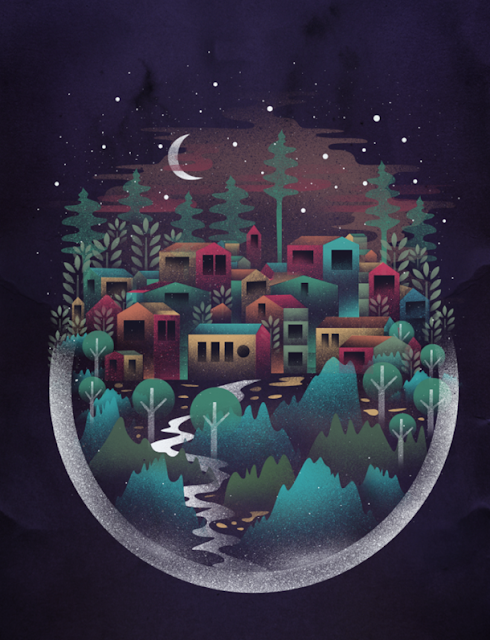 I'm sketching a thing this days; a game set on a permanent Twin Peakesque mystery; which will also draw a lot of themes and technology from the Western genre. I'll probably use the AW approach, I just like it too much to try anything new (2d6+mods, 6- is trouble, 7-9 a partial success and 10+ is a hit). But, on the combat matters, I've been drawn to an old dilemma I get whenever I make anything: HP or not HP?

On one side, I love the simplicity of Health Points: There is a fight: you roll high, you roll damage; you roll too bad, you're the damaged. They're fair and clear and admit no discussion: everyone knows the stakes.
Also, being that I love taking characters camping in dark woods, is very easy to reward good roleplaying by using HP and World of Dungeons rules: You didn't bother to buy a tent, or trying to make a refuge from the storm? no re-rolling HP for you.You want to risk making a fire, just to warm a kettle pot? Ok, roll to see if you attract unwanted attention. But you all get +1d6 HP because of the magical taste of coffee so far from home.

Also, the most important thing about rolling for HP damage is that, when you roll your weapon's damage, you can actually feel the joy of swinging a sword at something hoping to do as much harm as you can. You don't feel that when rolling to hit: that's like a bureaucracy step. But rolling for damage is when magic happens; and thats one of the things that I liked when I read Into the Odd (check it out if you haven't. In that game, you're assumed to hit always, and you roll directly for damage. Where is the trick? well, maybe is that monsters do that too)

On the other side, on a more down-to-earth setting, the whole HP concept loses meaning. On a common wild west setting, there are two main combat forms: by the gun and by raw fists. The first one will almost always end with one man dead in the blink of an eye. Translated to numbers, if a gun does 1d6+1 damage, it takes all the thrill of the showdown if a PC walks into the duel with 8 HP. Yes, it has sense on the sword and sorcery genre, where you can explain that as exhaustion and fighting mojo and the heroes can stand fighting after taking arrows to the chest. Also, there are lots of big monsters and it makes sense for them to be able to take lots of hits before they fall dead. But here, on my setting, you'll fight mainly people, maybe an occassional trollkin. And spirits, there are many of them too, but you can't really shoot them anyways. You won't go hunting things and take their XP.

When you shoot or kick someone, roll +DEX or +STR, and substract your enemy's armor (if there is any). On a 12+, that thing is defeated, killed or knocked out, you say how.
On a 10+ your GM will either give you the kill or be a dick and just give you an advantage over the guy.
On a 7-9 do it just like on a 10+, but there is a compromise or cost that makes sense about the situation (too much ammo, suffer an attack too, exposing to other dangers, etc).
On a 6 or less, you suffer an attack // the monster makes a move.

When you must stand up despite damage, poison and other shit, roll +STR.
On a 10+, you feel fine, at least for now. On a 7-9 you stand on the fight but suffer a debility (-1 to a stat) or must face a disadvantage. On a 6 or less, your enemy's attack has full effect on you (you're dead or out of combat if shot, Knocked out or ridiculized if beaten, maybe a debility if you're rolling against exhaustion or mild poison).
Here it is the main downside of not using HP: the GM is meant to decide the lethality of an attack instead of the rules. For most cases we can consider that guns, drinking acid and dynamite are lethal. The songs of the swamp nixes, drinking whiskey or getting beaten are not lethal, but will get you out of scene if you can't pass that save. Common sense is presumed, but there are those kind of players that will argue about anything.
PD: note that even on a 10+, all wounds or effects are still there, even if they aren't hindering you at the moment they may reappear and make you roll again when making big efforts or not setting a campfire properly.

Whenever you rest you get nothing, but if you don't do it you might roll for standing up despite damage even if you're not wounded (and get a debility).
Whenever you have a specially confortable rest at a safe place, or make a fire under the storm just to boil a coffee pot brought from your home far away, you can scratch away a debility.

Mechanically, enemies would be a name, a weapon, a drawing and a list of moves. Very tough enemies may have a numeric armor that is substracted from the roll. That armor has also a descriptive tag that justifies how and when that armor works.

Example (no drawing, I'm at the library right now):

Sheriff Payne, revolver, +2 armor (keen reflexes)
-give a last warning
-put a price on your head
-do what duty demands

Chun-li, kicks, +2 armor (when streetfighting)
-get very angry
-jump a lot
-tell you a chinese proverb strangely relevant to the situation.