To hit an enemy, succeed on a difficult task or save against a danger, roll a d12 under or equal relevant job+lvl (start at as level 1 rookies, raise a level every adventure, retire as veterans after level 5)

1. knight (using knightly weapons, enduring for a noble cause, inspiring others).
You get a suit of heavy armor (2AP); a mace and a shield (1AP) or a two handed sword.

2. thief (acting on stealth, knowing secrets, evading an attack, climbing). You get a grappling hook, 6 throwing knives or a ring of lockpicks

3. hunter (environment lore, ranged weapons -or natural weapons if you happen to be non-human-, tracking and survival tricks). You get a bow, a faithful pet or a shapeshifting necklace that lets you assume an animal form.

4. healer (heal the wounded, summoning spirits to perform a small task or bless an action with an extra roll). You get a bag of ingredients (use them to make all kinds of potions) a dangerous scroll on Elder Gods (use that power at your own risk) or a pack of tarot cards (use them to ask any question to the GM)

5. monk (brawling when unarmored, sense of danger, enduring harm, deep inner wisdom). You start with nunchucks, an old scar (re-roll any roll when you fight whoever did that to you, decide it whenever you want) or a diary filled with your master's teachings

6. tinker (craft and repair things, know something about everything, deception and charm). You start with the tools of any trade, a musical instrument or a small bag of gold

You all get one from this list: a cane, a knife, a healing potion, light armour (1AP) or a sling.

Initiative order is by weapon size (bows>slings>spears and two handed swords>swords and maces>claws, clubs and knives>fists), the other contender must roll to evade or block. If both contenders fit the same category, attacks are simultaneous and the highest succesful roll hits first.

When you're hit, you can roll to endure and thus stay on the fight. You can burn an armor point (AP) to succeed a failed endure roll.

Enemies have a name and a level (1 to 10) that covers whatever one expects from them, some AP and some weapon (goblin warrior, lvl 5, 1AP and a sword // dragon, lvl 10, 5AP, firebreath and claws). Whenever they must do it, they roll under that number.
Posted by jack tremaine at 03:56 2 comments:

Course on Armor-breaking: an HP-less damage system for World of Dungeons.

Wow!!!!! It's been like a lot of time since I last posted here. I've been busy, I'm now working and living in Ireland; didn't had much time for rpgs or drawing; but currently I'm slowly going back to it. I'm currently searching for a group to play around on the city, so I can improve my english.

I'm just leaving here some ideas for stripping HP from combat, again. I'm, as always, using World of Dungeons as a premise. Maybe I'll do something with this, maybe not; but it might inspire others; all feedback is appreciated! 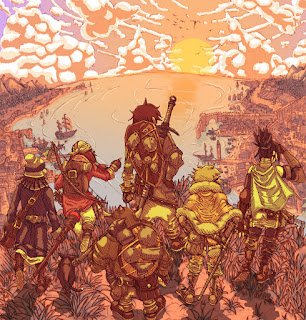 There are three kinds of weapons:

Raw weapons (fists,whips,slings) do no real damage. You can stun, entangle or hurt someone with them, but to do real damage with them you need to get a good position narratively.
Serious weapons (swords, axes, bows,a tiger's fangs) deal 1 wound on a hit. Most enemies have a single hit. Bosses might have two. Big monsters have three or four.
Big weapons (two handed weapons mostly, or a troll punch) deal 2 wounds.

Roll 2d6 + str on melee, 2d6+dex on ranged attacks, +1 if you have weapon proficency with that weapon type.

The fun of all this is in the armor workings:
NPCS and PCs alike get armor dice based on their armor:
light: 1d6
heavy: 2d6
trollskin: 3d6
shield: +1d6
certain foes can have +1d6 representing a great battle prowess or resilience

When an NPC or PC is hit, they roll all their armor dice. For each dice that comes up a 4,5 or 6, they prevent a wound. For each dice that comes up a 6, that piece of armor is broken and you cannot re-roll it until you repair it somehow. This also fits with a campaign where constant struggle to find a town to get new equipment and characters with repairing skills are a thing (Two things that I love!)

When an NPC reaches it's wound limit, it's dead or out of action (If it makes sense the GM may rule that it's just defeated or something if that's the tone of the game)

PCs have a wound too by default. When they reach 0, they can roll+STR to stay on the fight. On a hit, they do despite all aesthetical wounds. On a 7-9, they suffer a debility (-1 to a stat)

With heavily armored opponents, is very hard to land a hit at first, but as all armor dice are always rolled together, the more armor an opponent has, the easiest they're gonna break. If a piece of armor breaks, the order is always, if applicable: shield, armor, then resilience

Edit: actually writing an alternate "shot a blow" move:
On a 12+ you get three
On a 10+ choose two
On a 7-9 you get one
- you deal the weapon listed damage (raw weapons: stun, beat or entangle; warfare: 1 wound; heavy warfare: 2 wounds)
- your attack is armor piercing (enemy's armor dice are halved, round down) or you can claim other similar advantage
- there are no unexpected costs or dangers,

Posted by jack tremaine at 14:32 No comments: