Troll trifle at the Goatherd Inn

A storm is about to rage, and the PCs are on their way to a nearby Inn.

They find a man riding on the opposite way. If asked, he had a room booked back there, but he isn't spending the night under that roof; not after what they've just brought in. The baron and his men, who had went hunting deers, have hunted a troll instead and they've hung its head on the wall; like a trophy. But that thing still looks alive.

"I don't care if you laugh at me" Says the hurried man. "They all did already. I'm fine with getting soaked"

Night is upon you as you reach the tavern's light. Around the fire, some drink and make jokes under the sight of the hairy, growling head. The young Baron and his hunting party are celebrating, and being cliché dicks in general.

The inn's keeper isn't very pleased with this, but hey, It's money. His wife actually wants to burn the head on the fireplace as soon as the baron is drunk enough.

How will the baron's men react when this happens? Could the baron be persuaded the morning after that actually he did it, last night, in a brave intent for defending everybody when the head started moving and attacking them all?

Merchants and their families, pilgrims and shepards take turns to watch it from afar; some of the bravest kids touching it even, trying to impress their audience.

A lone hunter (a local, not one of the baron's thralls) doesn't drink. He's tense and crossed. Should you befriend him he'll tell you about that one time that he found a troll's hand in the woods. It crawled and stumbled around just like a big, wounded bear would; until it jumped and tried to reach him. He shot his arrows in awe until the thing stopped, just like it had to catch some breath. Then he actually saw something bigger approaching: the very troll had followed the trail of his hand, and he grabbed it with the other and put it back on the stump; and the wound magically sealed in a whim. Later he found out that the troll had got his hand cut off by a bear trap he had set.

Will you believe him? Would you spend the night in there? Which measures would you take if you did?

The troll is actually watching the scene, and concentrating all his might into trying to drive his massive body towards the inn (he'll succeed at some point!); tear the roof apart and get his head back. Then eat everybody out of spite and anger.

Did the baron really cut the troll's head, or did he just found it at the base of a canyon? How will he react when this happens? What about his hunting party?

What do you know about trolls? Do you know what injures them, what repels them, how they track you? How tall do you think the troll was, based on the head size?
Will it be able to smell you in the forest, in the darkness and under a raging storm?
Will you stand to protect the innocent when the troll comes? 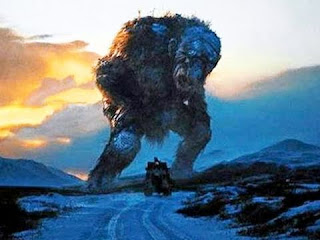 credits: the troll severed hand story is taken straight from arnold K's bestiary! the picture from the Trollhunter movie.